The story of a top donor for education: European Union / Mapping the financing of the Romanian education 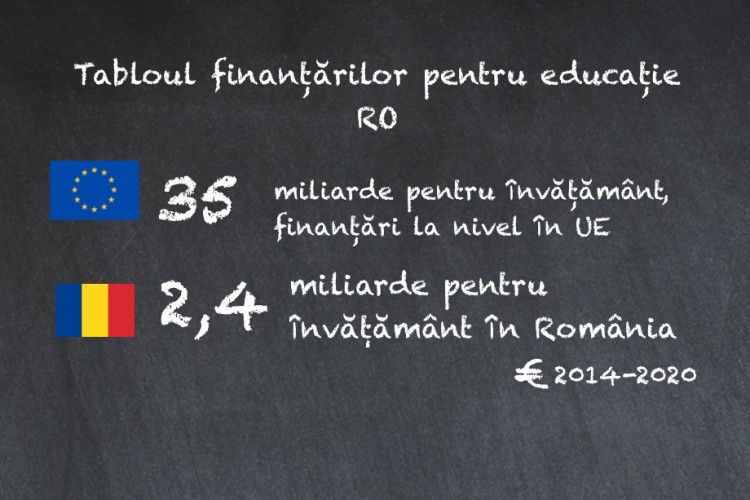 Romania received over 2.41 billion euro for education. The first projects started in 1991.

Which is the amount of funding granted to education projects in Romania?

·     In the 2014-2020 financing period, the funding from structural funds for the education sector across the EU amounts to some EUR 35 billion. Romania receives about EUR 1.9 billion in this field.

·     The funding Romania receives in the same period (2014-2020) for the implementation of Erasmus+ and European Solidarity Corps amounts to around EUR 515 million.

1.    Which was the first project financed by the EU in Romania and in which year did it start? What was the amount of EU financing?

·     Before Romania joined the EU, the PHARE programme was the main support instrument for preparing the country's EU accession. For instance, from 1991 to 1997 Romania received EUR 777.6 million in this framework. The main sectors which have benefited from PHARE aid programmes, technical assistance and investment were: privatisation and re-structuring activities, support for small and medium enterprises, education, transport, agriculture, and health, as well as institution building and investments linked to the adoption of the Community acquis of the EU.

·     Under the Erasmus programme, the first EU funded projects in education in Romania started in in the academic year 1998/1999. In this first year, 1,250 Romanian students were able to go abroad to study in a university of another EU country. 27 universities received Erasmus funds for these mobilities, with an average grant of EUR 100,000.

·     Under Regional Policy, the first national programme was the Regional Operational Programme 2007-2013. In the field of education, it encompassed investments for the rehabilitation and upgrading of schools, universities and professional training centres including the development of their infrastructure and equipment. Besides that, it supported improving student accommodation. These measures helped to ensure an educational process up to European standards and to increase the participation of pupils and adults in the education process. The amount dedicated to education investments in this programme came up to EUR 355 million.

2. How many projects have been financed or which amounts of EU funds have been granted since then to Romania [in the field of education]?

·     In particular regarding ERDF investments, priority is given to areas where enrolment rates in pre-school education are low and early school leaving is high. Investments in vocational education and training and higher education are also being financed.

·     In general, funding is available for modernisation of existing infrastructure, construction of new buildings and equipment. The funding scheme has raised a lot of interest from local and central government authorities and public universities.

·     Under the current ERDF-financed Regional Operational Programme, 814 projects in the field of education with a value of EUR 1.3 billion had been submitted by applicants by the third quarter of 2018. This is equivalent to 369 % of the allocation, which shows the very high demand.

·     At the end of 2018, 24 projects with an eligible amount of EUR 139.59 million were contracted under this programme and payments of EUR 38.69 million were already declared.

·     Over the years 2014 to 2018, EU funds allocated to Romania for Erasmus+ decentralised actions, managed by the Romanian National Agency, amount to EUR 350 million. This covered about 3,200 projects.

3. Which are the new financing lines currently available and what is foreseen to happen in the near future?

·     The ERDF investments in the framework of the Regional Operational Programme 2014-2020relate to pre-primary, primary and lower secondary education.

·     In the field of Infrastructure for early childhood education and care, priority is given to helping communities with enrolment rates below 85 % for children aged 4-6 years, to communities lacking early childhood education and care, and to children aged 0-3. A focus is also on establishments that ensure, in an inclusive approach, education of children from at-risk groups such as from poor families, Roma children, and children with special educational needs.

·     In the area of Infrastructure for primary and secondary school education, interventions aim at ensuring quality education for all children and will, as a matter of priority, consider groups at increased risk of school leaving, such as: children from families with low socio-economic levels, students from rural areas, young Roma and other disadvantaged or under-represented groups.

·     In the field of Infrastructure for vocational education and training and adult learning, increasing the duration of training to 3 years and increasing practical training have brought about a transformation in the educational system that will require continuous investment. Investments in high-tech schools and other infrastructure for vocational training are aimed at ensuring high-quality facilities in line with labour market needs through the construction, rehabilitation, expansion and equipping of these schools.

·     In the global context marked by the need for specialisation in many professions, it is necessary to improve lifelong learning for adults. Therefore, support will be given to lifelong learning centres located in technological colleges as well as infrastructure for vocational training, including pilot centres at regional level. These centres help acquire advanced knowledge and modern processes that facilitate the professional and social integration of persons in line with the needs of employers, in particular in competitive economic sectors.

·     Structural funds also provide support for Infrastructure for tertiary education. Given the important role that universities play for workforce specialisation and research activities, investments in their infrastructure help boosting their capacity to anticipate needs of the market regarding academic standards and quality. EU investments will also help to develop new programmes focusing on students' transversal skills, i.e. skills that are not specifically related to a particular job and can be used in variety of work settings.

·     To achieve the objectives of our investment priorities, the following types of investments are carried out:

o  First, the construction, upgrading, extension and equipping of infrastructure for early childhood education, i.e. nurseries and kindergartens, is being supported with an allocation of EUR 94.5 millionbetween 2014 and 2020.

o  Secondly, the same kind of support is available for general compulsory education, i.e. schools from class I to VIII, with an allocation of EUR 96 million.

·     Education authorities and universities can also build partnerships with other institutions that can contribute to their projects.

·     In addition, specific support is also being given through the Danube Transnational Programme (DTP). It is not focused on education in general, but some DTP projects include training and skills measures, like the transnational project "Danube SKILLS" (www.interreg-danube.eu/approved-projects/danube-skills).

·     In the next financing period 2021-27, ERDF will continue its contribution to improving access to inclusive and quality education and life-long learning. This could include investments in infrastructure and/or equipment in early childhood education, schools, vocational education and training as well as universities.

·     For Erasmus+, the Commission proposed to double the funds for the period 2021-2027 to reach a total amount of EUR 30 billion for all Member States.

4. Will there be an increase or decrease of funds allocated to the education sector? And which will be the main priorities/topics for financing?

·     The level of funding and the specific areas and types of investment for the next period will be the object of negotiations between the national authorities and the European Commission.

5. Is there an impact assessment of these projects (on the whole and in the education sector)?

The evaluation of the 2007-2013 Cohesion Policy for Romania showed, among others, the following results:

·     893 new research and development laboratories were created and received direct support; and further 558 research projects have been supported.

·     2 488 schools and school inspectorates were connected to broadband internet.

·     100 ambulatories and hospitals as well as 230 social centres and social infrastructures have been rehabilitated.

·     385 km of new roads on the trans-European transport network (TEN-T) and more than 2,400 km of county roads were constructed and repaired;

·     287 municipalities benefitted from investments in water and wastewater facilities;

·     more than 40 000 apartments benefitted from investments in energy efficiency.

In 2017 a mid term evaluation of Erasmus+ was conducted on two levels: at national level and European level. According to the Romanian report:

·     The programme benefitted the Romanian higher education system by stimulating cooperation between universities, increasing the prestige and value of their activities, and creating a more international and intercultural environment.

·     In the field of school education and vocational education and training the programme proved to have significant impact on pupils (improving self-esteem, increased learning motivation, develop interpersonal skills and openness to diversity), parents (closer involvement in school life) and schools (more prone to new practices and innovation, developing school organisation, as well as integration and support mechanism for including children from disadvantaged areas).

·     The added value of Erasmus+ was also noticed in the easier integration of students in the labour market. Many employers value highly an Erasmus+ experience and Erasmus+ beneficiaries noted higher chances in being employed, within Romania and abroad.

6. Was the impact of these projects as expected? (meaning, were the expectations surpassed or, to the contrary, not met?)

·     In the field of Cohesion Policy, evaluation results of the programming period 2007-2013 show that interventions had a positive effect on improving the study conditions in the receiving schools, thus increasing the average number of pupils in rural areas and generating a slight improvement in their school performance.

·     At the same time, facilitating access to education, in particular pupils from rural areas, those from vulnerable social backgrounds or with disabilities, is an effect directly attributable to these investments – by creating a friendlier learning environment, better suited to students with special needs, and by providing modern equipment and learning materials.

·     A total of 546 education units were rehabilitated or equipped, covering needs of 235,811 pupils. In addition, 32,792 children belonging to disadvantaged population groups benefited from rehabilitated and equipped establishments.

·     As regards Erasmus, expectations have been met as the project beneficiaries highly appreciated the opportunities the programme provided. The beneficiaries’ final reports highlight the impact of the projects on several levels: on the individual level of the participants in the projects, the institutional level and the community level.

7. What was the evolution, in time, of the amount/number of EU-funded projects in Romania?

·     On the allocations and impact of Cohesion Policy support in the previous financing period, I mentioned figures and examples previously. (See figures provided above.)

·     The overall allocation to Romania under the European Structural and Investment Funds (ESIF) in the current period 2014-2020 amounts to EUR 30.8 billion. The allocation for Cohesion Policy only amounts to EUR 22.6 billion, the fifth largest among the EU Member States.

·     In the same time frame, Romania has an allocation of EUR 8.1 billion for from the European Agricultural Fund for Rural Development (EAFRD) to co-finance its Rural Development Programme, which equals a quarter of Romania's total ESIF allocation. It is the second largest single rural development programme in the EU after Poland.

·     In time, the budget allocated to Romania for EU projects in education, training and youth under Erasmus+ evolved from around EUR 3 million in 1998 to around EUR 100 million in 2019.  The number of projects financed grew accordingly.

8. From the projects recently financed in the education sector, which are the most significant?

·     We would not like to single out individual projects as the current programme foresees the rehabilitation of educational establishments based on the mapping and prioritisation of the Romanian Ministry of Education.